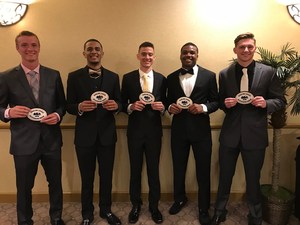 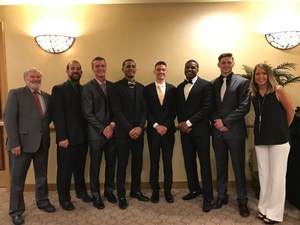 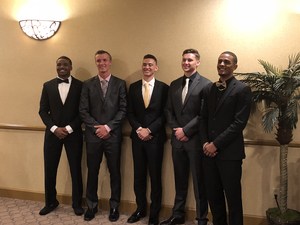 Warren Bryan, Evan Crockett, Christopher Currie, Elijah McCullough and Jacob Turner
The Baseline League honored five Damien High School student-athletes as the best and finest seniors at the annual Banquet and Recognition Ceremony hosted on Monday, April 23 at Doubletree by Hilton Claremont.
Recognized for their achievements in scholarship, school, leadership, community and sport were Warren Bryan (Pomona), Evan Crockett (Chino Hills), Christopher Currie (Upland), Elijah McCullough (Chino Hills) and Jacob Turner (Chino).
Bryan, the son of William and Cynthia, is a four-year varsity member of the football team and two-year captain. This year, the senior quarterback led the Spartans to the CIF-SS Quarterfinals. He is a three-time First Team All-Baseline League, two-time First Team All-San Gabriel Valley, First Team All-Inland Valley, two-time Damien Offensive MVP and a National Football Foundation Scholarship Nominee. He is also a two-year member of the varsity basketball team. Academically, He has been on the honor roll all seven semesters at Damien. Bryan will continue his football career at the United State Air Force Academy.
Crockett, the son of Marcus and Monica, has been an outstanding offensive lineman. He is a First Team All-Baseball League and First Team All-Area honoree. He is active off-the-field serving as a Kairos leader for senior retreats, a volunteer at the Placentia Soup Kitchen, first place in the Orange County Fair Baking Competition and fifth place at the California State Chevron Engineering Design Competition. In 2017, as a junior, he was honored as the top academic student for AP Calculus BC.
Currie, son of Peter and Connie, exemplifies student-athlete. A two-year member of track & field and one year of varsity basketball, he is a top academic student at Damien. He has earned Gold Honor Roll all 15 quarters (4.0+). He is an AP Scholar of Distinction. A six-semester member of the California Scholastic Federation and National Honor Society (CSF/NHS). He was accepted into the Envision Medical Leadership Program at UCLA. In 2017, he was honored as the top student in AP Physics. He is a Kairos leader for senior retreats and a member of the Christian Leadership Program. He was also voted Vice President of two student organizations: Future Doctors of America and Red Cross. In his four years at Damien, he has volunteered over 500 hours in community service. Currie has been accepted to Gonzaga, Santa Clara and the University of San Diego.
McCullough, son of Herman and Kim, is a three-year captain of the varsity basketball team and a four-year member. He holds the record for most made three pointers in a game and season for Damien. As a freshmen, he was on the CIF Division III State Championship team. He is a First Team All-Baseline League. He is an active member of the Sports Medicine Program. Academically, he has been on the honor roll all four years. He has signed a National Letter of Intent to play at Sacramento State.
Turner, son of Derrick Turner and Debra Parkins, is a two-sport-star in football and track & field and one of Damien’s most recognizable students in the classroom and community. He is a three-year varsity football member and a co-captain in 2017. The wide receiver was named to Second Team All-Baseline League and All-San Gabriel Valley. He was selected to for the 2017 Inland Valley Hall of Fame Classic All-Star Football Game. He is currently the ASB President and formerly the junior class president and served as the sophomore and freshmen vice president. He is the 2017 recipient of the Michael Don Schneberger Memorial Scholarship. He serviced on Congresswoman Norma Torres’ Youth Advisory Committee. For community service, he has volunteered with the Knights of Columbus, Isaiah’s Rock, Mary’s Table and Under Armour Friday Night Lights Youth Football Games. Turner was awarded a U.S. Military Academy Nomination to West Point by Torres. He has been accepted to California Lutheran University, Gonzaga University, College of Saint Benedict Saint John's University, University of Redlands, University of San Diego, and Whittier College.
The Baseline League is a high school athletic conference that is part of the CIF Southern Section (SS). The league is comprised of Chino Hills, Damien (La Verne, CA), Etiwanda (Rancho Cucamonga, CA), Los Osos (Rancho Cucamonga, CA), Rancho Cucamonga, St. Lucy’s (Glendora, CA) and Upland.
Print