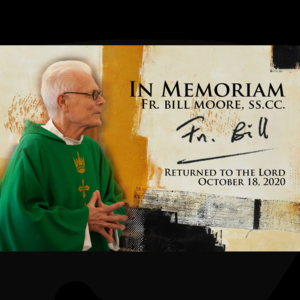 The Damien community mourns the recent passing of alumnus and former faculty member, Fr. Bill Moore, SS.CC. As a fellow Spartan, he was our friend and brother. As a priest, he provided those around him with a deeper understanding of faith. His works of art, inspired by the Master, allowed all of us to see through his eyes and experience Christ within his artistic representations. Our prayers are with his family and his fellow priests in the Congregation of the Sacred Hearts.

Fr. Bill was born in Glendale, California, and attended Damien from 1964-67. He received a B.A. in Fine Arts from Saint Mary's University, Winona, Minnesota, and a Master's Degree in Theology from the Washington Theological Coalition. He was ordained a Catholic priest in 1975 and taught art and religion at Damien High School and at Bishop Alemany High School in Mission Hills.

From 1990 through 1997 he served as Associate Pastor and Pastor at Holy Name of Mary Church in San Dimas. In 1998, Fr. Bill was assigned by the Congregation of the Sacred Hearts to the Ministry of the Arts.


Over his lifetime, Fr. Bill was prolific in his work, seeking to inspire hope and spirituality in his art: “my art is all about hope in, and love for the physical world, which according to my beliefs and traditions, can link us to the spiritual realms-to God; through my art, I'm asking myself and anyone who would wish, to slow down, look, touch, and consider the essential colors, shapes, and textures that can feed our souls.” FR. BILL MOORE, SS.CC. created a Banquet of Beauty which became the heartscapes that he hung in our souls and sanctified them and made them sacred.

Bill was born September 18, 1949.  His mother, Grace Duffy, was the daughter of Irish Catholic parents in Pittsburgh, Pa.  His dad, Herman, always known as Cliff, was born in Memphis, Tennessee.  His father and grandfather were both miners.  Bill had three brothers:  Steve, Tom and John.  He attended St. Dorothy’s Grade School in Glendora and Damien High School in La Verne.  He admired the Sacred Hearts Priests who taught him there so much that he decided to beome one of them.

He began his formation for Religious life at the Sacred Hearts Novitiate in Wareham, Mass. Having completed that year of spiritual growth and development, he went on to study at St. Theresa’s College in Winona, Minnesota, from which institution he received a BA in Art.  Bill received an MA in Theology in Washington, D.C.

After ordination to the Priesthood on August 23, 1975 in Glendora, Ca. , Bill was assigned to teach Art, Religion and Geography at  Damien High School.  After four years at Damien, he was assigned to Bishop Alemany High School where he taught both Art and Religion. Bill always had a great love of fishing.  During his years at Alemany, he was able to indulge this passion with his friends and students at Lake Castaic.

After nine years at Alemany, Bill was assigned to Holy Name of Mary Parish in San Dimas. The parishioners found in Bill a young, creative,  kind and sensitive associate pastor.  He also had his own associate who seemed to be the boss:  CIRCI, his cat.  Bill served as Pastor at Holy Name for one year in the mid-nineties. He called it “the golden year.” In 1997, the Sacred Hearts Community granted Bill’s request for a sabbatical .  He had developed a great love of the desert from his earliest years when he spent many happy hours exploring it with his father.  Consequently, he was delighted to move to Hemet where he embraced his gift as an artist.  At the end of his sabbatical year, Bill received permission to begin the Ministry of the Arts.  He moved to Pomona and opened a store front gallery on Second Street.

During the years when he was at Holy Name of Mary, Bill’s favorite ministry was to the young men who were in the three detention camps in the hills above the parish. To his great joy, he was now able to resume that Ministry on Sundays, while being a full time creative artist the rest of the week.  He often said in reference to the young men at the camps, “I know they really want to change.”

Someone once said you become what you see and what he saw he always transformed into Moore.

Bill was diagnosed with prostate cancer in March 2017 and it spread to his bones.  At that time, doctors at City of Hope estimated that he would have about one year to live. While dealing with his cancer, Bill was able to resume part time ministry at Holy Name of Mary and continue to create magnificent paintings. In March 2020, his cancer had spread to his colon and liver. Towards the end of his life, he had a huge commitment to having one last exhibition of his art.  This came into reality on September 12, 2020 and was called My Last Art Beat.  On that evening, the gathering of so many of his friends and art lovers made his heart beat with love,  not so much for all of the paintings on the walls but for what he saw written on the faces and voiced from the lips of those present.

At last, he got to see his legacy,

He dared to live fully and he dared to die freely.

While his paintings adorn the walls of our workplaces and homes, his masterpieces remain on the walls of our hearts.  They are a testimony to what a human human being can become.  In one of his journals, he wrote:

“I look around and the world seems dark and frightening.

I want to be the light.”

As Bill Moore said, “People who have come to know the Joy of God, do not deny the darkness, but they choose not to live in it.  They claim the bright light that shines in the darkness can be trusted.”

The brilliance of humanity shone through him revealing the God who dwelt within him.

He trusted the Creator of our earth so much that he himself became a co-creator on earth.