The Damien community mourns the passing of Father Peter Dennis. 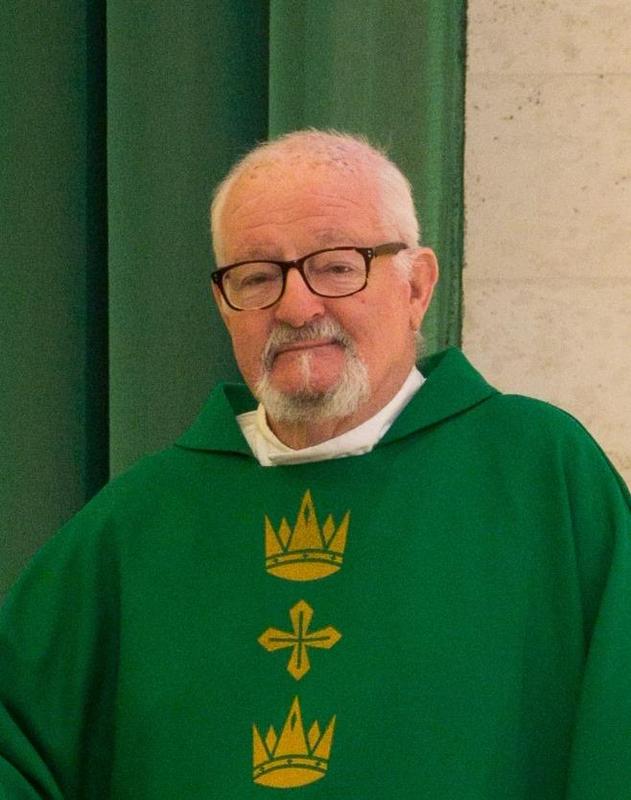 Having fought the good fight, having kept the faith, having finished the race, Fr. Peter Kerril Dennis, age 82, of the Congregation of the Sacred Hearts, died peacefully on Thursday, May 21, 2020 in the SS.CC. Community House on the campus of Damien High School.
Fr. Peter Kerril Dennis, SS.CC.
Fr. Peter was born in Ireland on December 9, 1937 in Piltown, County Kilkenny to James and Mary Helen (Kelly) Dennis He was baptized in the local church in Piltown. Later, the family moved to Waterford, where he was confirmed in St. Carthages, and attended Mount Mellory for his secondary education. In August 5, 1955, he entered the Novitiate of the Congregation of the Sacred Hearts, in Tanagh, Cootehill, Co. Cavan, and made his first Profession (temporary vows) there a year later on August 15, 1956. He then came to the United States for studies in Philosophy and Theology from 1956-1962 at the SS.CC. Queen of Peace Mission Seminary, Jaffrey Center, New Hampshire. During this time under the watchful eye of Fr. Don Miller as his mentor, he became widely known as “Jax” (Jakes), as the fixer of pipes & all things related to joinery, as well as working in partnership with Steve Cordeiro on ever present projects in woodwork. Again it was Peter (together with Martin O’Loghlen, Mike Gilsenan, & Donathus Stewart) who was a member of the summertime work crew that toiled under the tutelage of Fr. Miller on certain projects in Wareham, most notably the building of the Chapel in the Woods.
By 1962 Fr. Peter had achieved his BA in Philosophy and MA in Theology and had Minor Orders conferred on him, before returning to his homeland and the SS.CC. Community in Cootehill, County Cavan for Ordination to the Priesthood on June 24, 1962, together with the other Irish members of his class — Patsy Argue, Dominic Crewe, Malachi Cullen, Chris Grannell, Willie Lean, and Pat Travers. His first assignment, in September, 1962, was at Pomona Catholic Boys High School in La Verne, California (renamed Damien High School in 1967), while also assisting at local parishes on the weekends. While at the high school, he variously served as teacher, Dean of Discipline, Coach, and Vice Principal. It was he, together with Fr. Joe McGeedy, who introduced the game of soccer to the school. From 1985 to 1986, he served as Associate Pastor at Holy Name of Mary in San Dimas, before assuming the role of pastor of that parish from 1986 to 1996. During that time he also filled some other responsibilities on the side — as a member of the Archdiocesan Priests’ Council, a “Master-Priest” member of the Engaged Encounter, a member of the SS.CC. Provincial Council, as well as an active member of “Call to Action,” “Priests for Equality,” and “Women’s Ordination Conference.”
He spent time at Berkeley, California, completing his studies in Applied Theology, as well as taking several courses in Contemporary Theology at St. Mary’s Summer School in Moraga, California. He also helped out for two years at St. Joe’s, Upland.
Fr. Peter’s ministry was always characterized by the charism of the Congregation of the Sacred Hearts — “To Contemplate, Live, and Proclaim God’s love.” He did this through his compassionate care for the people of God everywhere that he served. He was greatly loved for his robust spirituality and his warm, joyful spirit. He was particularly effective in bringing God’s compassionate love to the poor and to those who were suffering in any way.
Fr. Peter was preceded in death by his mother & father (James and Mary Helen), his brothers Eugene, Michael and his wife Bridie, his sister Mai and her husband Eugene, and his grand daughter Sandra Dennis and grandson Harry Dennis.
Fr. Peter will be deeply missed by his Brother Priests, particularly, the fellow members of the Congregation of the Sacred Hearts, his brothers —Sean and Dermot, his nephews & nieces — Aideen, Blathnaid, Brian, Clive, Davenit, David, Elaine, Eoin, Finbar, Gary, Ian, Lorraine, Maura, Roisin, Rory, and Sinead; his grand nephews and nieces — Amy, Eddie, Charles, Conor, Eli, Emily, James, Mathias, Michael, Nicole, Olivia, Peter, Ronan, Sean, Seth, Suzanne, Tom, Tommii, Victoria Barry and Victoria Dennis, all of whom so greatly enjoyed his visits to Ireland, will miss him deeply as will their spouses and friends whom he loved very much. His former students and parishioners, so many of whom remember him with deep affection.
He had the gift of stopping time And listening well so that it was easy To hear who we could become And that was the future he held safe For each of us in his great heart You may ask, what now? And we hope you understand When we speak softly among ourselves And do not answer just yet For our future is no longer The same without him — Brian Andrea