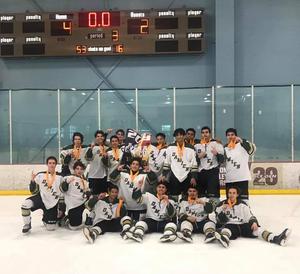 The Damien Ice Hockey Team is having one of its best season’s to date. Competing in both the California Amateur Hockey Association (CAHA) and Anaheim Ducks High School Hockey League (ADHSL), the Spartans earned post-season berths in both leagues.

In the CAHA, the Spartans ended the regular season 10-6-4 earning the #3 seed in Division IA California State Tournament. The top four teams in Division IA will play head-to-head this weekend at Great Park Ice and Five Point Arena. If the team earns a berth to the state final, they will automatically move on to the national tournament in Cleveland, OH:

In the ADHSL, the Spartans finished the regular season 16-10-4 earning the #3 seed in Division I. The ADHSL post-season will drop puck on Thursday, March 6, as the Spartans take on St. Mary’s High School at 5:20 pm, Great Park Ice and Five Point Arena.

The Spartans are coached by Barry Sherer with assistance from Jeff Furlong and Curtis Fisher. Senior Jalen Cordura, a team captain, finished the season as the state’s scoring leader, the CAHA scoring champion, top scorer in the ADHSL and an all-star for CAHA and ADHSL. Fellow team captains senior Jordan Bacani and Junior Ian Reed also received all-star honors this season.

For more information on the leagues and post-season