Joseph de Veuster, known throughout the world as Father Damien, was born on January 3, 1840, at Tremeloo, (not far from Louvain) Belgium. On February 2, 1859, he followed in the footsteps of his brother Pamphile by entering the Congregation of the Sacred Hearts of Jesus and Mary; and on October 7, 1860, he made his religious profession choosing the name of Damien.

In October 1863, Damien's brother, Father Pamphile, who had been assigned to the Sacred Hearts Mission in Hawaii, fell ill of typhus. Damien, not yet ordained, begged to be allowed to take his brother's place, for which permission was granted.

Following ordination to the Priesthood on May 21, 1864, in the Cathedral of Our Lady of Peace in Honolulu, Damien spent the next eight years in the district of Kohala on the Island of Hawaii. In July 1872, Damien wrote to the Father General that many of his parishioners had been sent to the Leper Settlement on Molokai; he spoke of an “undeniable feeling that soon I shall join them.”

When Damien first arrived on the Island of Molokai on May 10, 1873, the situation, in the words of Robert Louis Stevenson, was, “a pitiful place to visit and hell to dwell in.” Lepers were sent there to rot and die, and no attempt was made to cure or arrest the disease. Lepers were outcasts from society, separated from those they loved, suffering from a disease considered loathsome and unclean, all but abandoned by the medical profession, and without even the comfort of any but the most infrequent religious services. They easily succumbed to apathy and hopelessness. Many, disheartened to the point of desperation, seized upon anything that would give them a moment's surcease - alcohol, gambling, lewd dancing, and debauchery - and their cry of welcome as boatload after boatload of new patients arrived, was, “In this place there is no law.” Damien wrote, “The Settlement absolutely has to have a priest . . . I believe it my duty to offer myself . . . I am willing to devote my life to the leprosy victims. The sick are arriving by boatloads. They die in droves . . . I become a leper with lepers, in order to win them all for Jesus Christ. When I preach, I am in the habit of saying,"We Lepers!"

For sixteen years - from 1873 to 1889 - Father Damien ministered to the lepers, bringing as much material and spiritual comfort to them as he could. His self-imposed duties included anything that would help or comfort them, from bandaging sores, making coffins, and digging graves to building churches, hearing confessions, and saying Mass. He went to considerable trouble in making a much-needed fresh-water supply available for the settlement. He ate from a common bowl, food prepared by a leper, smoked the common pipe passed from mouth to mouth and used tools which were commonly owned. Indeed he was, in the words of St. Paul, “All things to all Men.”

“From morning till night,” he wrote, “I am surrounded by terrible physical and moral miseries. However, I try to have a certain gaiety to build their courage.” In that effort, he certainly was successful. The presence of this concerned and good-natured priest completely changed the atmosphere of the settlement. The poor people quickly sensed that they had a true friend. They were no longer orphans. A wave of hope surged through the colony. They were no longer those who society had conveniently chosen to forget, because Damien has opened the eyes of the world to the needs and sufferings of millions of lepers and had thereby stirred many to the generous support of work on their behalf.

Apostle of the Eucharist

Father Damien was truly an apostle of the Eucharist. This love he had for the Eucharist was transmitted to the lepers. He brought them to closer union with their Maker through the beautiful liturgies he organized, frequent Benediction, and Eucharistic Processions.

It was when he set up numerous adoration chapels that he experienced the depth of the lepers' faith and devotion. Related to the establishment of Perpetual Eucharistic Adoration on the island, Father Damien wrote to his provincial in 1888, "This is the fifteenth year we observe night adoration..., all of us lepers."

Father Damien lived for the Eucharist. It was this strong apostleship that filled the lives of the lepers. Their Eucharistic adoration was an edifying homage to the Lord. He wrote to his brother, "Without the constant presence of our Divine Master, I would never be able to cast my lot with that of the lepers."

Five years after becoming a victim of the dreaded disease, Father Damien died peacefully on April 15, 1889, at the beginning of Holy Week. On June 4, 1995, Pope John Paul II declared Father Damien Blessed and established his Feast Day as May 10.

Very few missionaries receive gratitude and high public honor for their dedication and zeal. We, the Congregation of the Sacred Hearts, are rightly proud, therefore, that not only is this high school named in his honor, but that also there stands a statue in his honor in a very exclusive gallery, Statuary Hall in the nation's Capitol, Washington, DC. 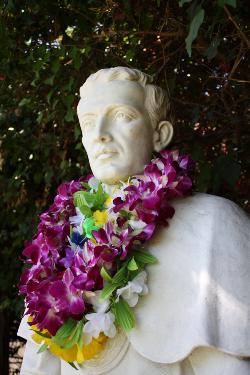