Holy Names Academy, a boarding high school for girls, located on Holt Avenue in Pomona, closed its doors in June 1949. In September of that year, it was reopened by Monsignor English, pastor of St. Joseph Church, Pomona, as a high school for both boys and girls of the parish and surrounding parishes. Newly staffed by the Felician Sisters, it was named “Pomona Catholic High School.”

In 1959, the Bonita School District moved the public high school from Bonita Avenue to their new location on D Street in La Verne. His Eminence James Francis Cardinal McIntyre purchased the old campus site, and in September 1959, the newly named “Pomona Catholic Boys High School” welcomed its first freshman class. In 1967, the school was given the name “Damien High School” in honor of Saint Damien de Veuster, SS.CC., who spent and gave his life for the abandoned lepers of Molokai, Hawaii. His fellow religious, the Congregation of the Sacred Hearts, have staffed and administered the school since its beginning in La Verne.

Since opening our doors, Damien High School has been able to provide thousands of young boys the opportunity to grow into men of service, scholarship and faith. Through participation in academics, extracurricular activities, athletics and campus ministry, graduates of Damien are prepared to meet the demands of higher education, to contribute to society and to act with Christ-like values. Our graduates leave Damien and enter the world with a capacity for civic engagement, political knowledge and social tolerance. 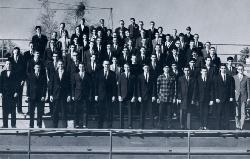