About Us » School History

Early in 1898 Father Fisher of St. Joseph Parish in Pomona, CA extended an invitation to the order of the Holy Name of Jesus and Mary from Oakland to investigate the possibilities of opening a school in Pomona. After some deliberation, the offer was accepted and the Academy of the Holy Names constructed a new school on Holt Avenue in Pomona.

Later the school would be known as the Holy Names Academy, a boarding high school for girls.

In 1927, a fire destroyed the old building. The decision was to rebuild the structure.  In 1928, the project was completed. This building still stands today.

In 1949, the Right Reverend Monsignor Thomas P. English, in collaboration with St. Joseph Parish, decided to buy the academy and open a co-educational high school. The Felician Sisters accepted the invitation to staff the school. The school name was St. Joseph High School.

In 1954, Pomona Catholic High School received accreditation status with the Office of Relations with Schools – University of California.

Classes were held in many of the buildings, which were as yet relics of the Works Progress Administration of the 1930s.

In 1964, many of the older buildings on the La Verne site were demolished and the campus received a face-lift.

In 1965, parking facilities were completed.

In 1966, the priests’ residence was completed.

In 1967, a new phase of school development begun. The school was given the name “Damien High School” in honor of Blessed Damien de Veuster, SS.CC., who spent and gave his life for the abandoned lepers of Molokai, Hawaii. His fellow religious brothers, the Sacred Hearts Fathers, have staffed and administered the school since its beginning in La Verne.

The 1970s and 1980s were also a time of growth for Damien, witnessing the completion of a new gymnasium, the four classrooms of the 500 wing and the Administration and Science building, which includes six classrooms, two science labs, and administration offices.

In 1995, a music room and a library renovation was completed.

In 1996, a new swimming pool and locker room were constructed. Six new tennis courts were built and a new ticket/snack bar/permanent restroom facility was built in Spartan Stadium. 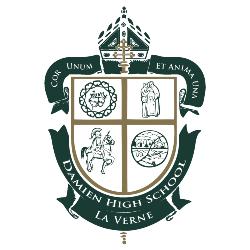